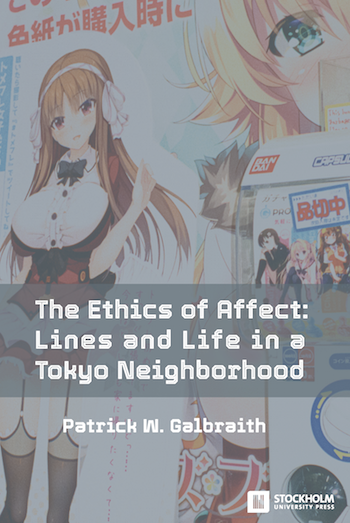 The Ethics of Affect

Lines and Life in a Tokyo Neighborhood

Part of the Stockholm Studies in Media Arts Japan series.

Based on ongoing fieldwork in the Akihabara neighborhood of Tokyo, specifically a targeted subproject from 2014 to 2015, this book explores how and to what effect lines are drawn by producers, players and critics of bishōjo games. Focusing on interactions with manga/anime-style characters, these adult computer games often feature explicit sex acts. Noting that the bishōjo, or “cute girl characters,” in these games can appear quite young, legal actions have been taken in a number of countries to categorize and prohibit the content as child abuse material. In response to the risk of manga/anime images encouraging underage sexualization, lawmakers are moved to regulate them in the same way as photographs or film; triggered by images, the line between fiction and reality is erased, or redrawn to collapse forms together. While Japanese politicians continue to debate a similar course, sustained engagement with bishōjo game producers, players and critics sheds light on alternative movement. Manga/anime-style characters trigger an affective response in interactions with their creators and users, who draw and negotiate lines between fiction and reality. Interacting with characters and one another, bishōjo gamers draw lines between what is fictional and what is “real,” even as the characters are real in their own right and relations with them are extended beyond games; some even see the characters as significant others and refer to them using intimate terms of commitment such as “my wife.” This book argues for understanding the everyday practice of insisting on lines, or drawing a line between humans and nonhumans and orienting oneself toward the drawn lines of the latter, as demonstrating an emergent form of ethics. Occurring individually and socially in both private and public spaces, the response to fictional characters not only discourages harming human beings, but also supports life in more-than-human worlds. For many in contemporary Japan and beyond, interactions and relations with fictional and real others are nothing short of lifelines.

A goal of cultural anthropology is to understand the “other,” and what could be more other than a subculture of self-described “perverts” who enjoy pornographic bishōjo games? Are these young men engaging in harmless sexual fantasy or rehearsing for actual rape and misogyny? Debates surrounding the ethical and social implications of these games have thus far been conducted with minimal knowledge about the people consuming them. Thanks to Galbraith’s audacious fieldwork, we are able to get past Western stereotypes about “weird Japan” and put a human face on the people at the center of a moral firestorm. This data does not end the moral debate about these games, but it does provide vitally needed perspective. – Joseph P. Laycock, author of Dangerous Games: What the Moral Panic over Role-Playing Games Says about Play, Religion, and Imagined Worlds

Galbraith’s book is an erudite and refreshing study of Akihabara’s adult or erotic bishōjo games industries. It tackles people’s imaginary sex lives, sexual immersion and moe experiences with manga/anime-style cute girl characters. These types of relations require delicate analysis rather than a more convenient rush to moral judgement. The book offers a prime example of culturally informed and ethical scholarship about this highly contentious subject. It will be immensely valuable for academics, designers, fans, artists, activists and policy makers around the globe. Galbraith is a leading authority and ethnographer whose fieldwork and “peer-learning” methods of research are meticulous and uncompromising. The book gives a comprehensive overview of games, affective game design and game-playing, gaming events and raves, without at any point leaving behind the great sex wars and academic debates of our times. – Katrien Jacobs, author of People’s Pornography: Sex and Surveillance on the Chinese Internet